Real estate headlines across the country are buzzing with tales of increases in home prices, but no place more loudly than right here in Colorado. We are the #1 hottest market in the nation, for now.

While NAR forecasts the hottest fall market in years overall, we are hearing that, here in Colorado, we may begin to see a major slowdown of sales.

Our local real estate forecasters are all over the map between positive and negative predictions. The naysayers go so far as to assert that heavy buyer demand is a bad thing that needs artificial intervention. They are even advocating the possibility of freezing prices for fear of another housing bubble forming.

This market has many facets to it and there are always plenty of things that may inspire fear but a housing bubble does not appear to be one of them, at least, not at this time.

If it’s raining we want sunshine, if the sun is shining we really could use a little rain, couldn’t we?

Seems that whatever things are we are always waiting for another shoe of sorts to drop.

What is dropping are the leaves across the Front Range. And while interest rates aren’t dropping, they didn’t rise as hinted at in earlier predictions, either!

Nice for home buyers, but it still doesn’t seem to be budging home sellers toward venturing into the marketplace. Will steady pressure of demand eventually loosen the current suppressed inventory?

Certainly this almost flat line inventory contributes to the continually rising home prices; a reasonable expectation. Prices rise, prices flatten out, prices may even fall a bit, but the cycle, left alone, eventually favors each side, buyer or seller, at some point.

Those positively anorexic inventory numbers go a long way toward explaining the slim sales figures for September. Active units for sale sat at 763, with 351 of those selling and closed. That’s a touch below the 416 sold last year; but there is no lack of eager buyers in this marketplace. 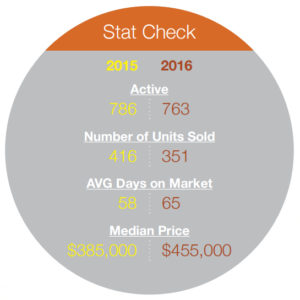 In spite of the high rising prices there remains a reluctance to make a choice to sell. What’s stopping those who might otherwise have jumped into this market by now, with the restoration of equity for over 80% of home owners? Minimal inventory to choose from is causing a logistics difficulty. More people are moving into Colorado than are moving out!

Other forces at work, according to a recent RISMedia article, include the influence of social media on decision making. Shifts in housing decisions, however slight, are affecting the buying and selling actions in the marketplace. Just the appearance of inability to find suitable new housing holds many in place that might otherwise have made a move.

In response to the heavy demand for homes, builders have been scrambling to fill the gap. Are they scrambling fast enough? Not according to reports from NAR which indicates that new unit starts have not kept pace with need based on employment figures.

Whether sales driven or simply seasonal, our real estate industry slowdown has begun. Building permits, housing starts and existing home sales are all down; some by just fractions of a percentage, but movement has been in the downward direction. No need for concern though, since this is the usual report we hear at this time of year.